Thank you for your patience while we retrieve your images.

See the trailer at; http://www.youtube.com/watch?v=GjGnCa0XYhY

THE UNINVITED. This is a tail of two sisters. The younger, a melancholy, moody girl, returns to home after being in a mental institute for a year and the older, more positive and upbeat, welcomes her back. The younger sister comes home to find the idol of her life, her dad, has remarried and her mother has gone. Slowly the world around her unravels as she pieces the memories back together and it comes apparent why her mother is gone, why her dad has remarried and eventually why her sister doesn't really exist.

This is a remake of a successful Korean film directed by Jee-woon Kim. To honor the original we decided to use wallpapers and tone to communicate mood and the characters in the film. We wanted the main house to feel like a family belonged and had grown up there. Worn around the edges but with a hint of Gothic. We constructed a boat house on a cliff over hanging the sea that was newly built but still felt apart of the house and joined to it.
© andrew menzies PORTFOLIO 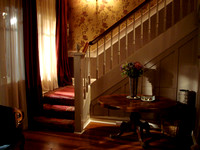 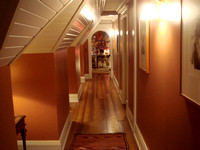 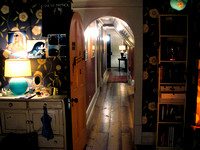